The Khedairi family has thrived for over two hundred years as one of the most prominent trading families in Iraq. The family roots can be traced in lineage back to the Shammar tribe, among the largest tribes in Najd, Greater Syria, and Iraq.

Part of the family started settling in the old, more conservative area of Baghdad known as Bab Al Sheikh during the late 18th century. There, they founded mosques, a school and water supply from the river. Unfortunately, non of these establishments exist in that area, due to the continuous changes of the urban planning of Baghdad during the past 200 years.

Abdulrazaq Al Khedairi, the grandfather of the current owner, was considered among the most prominent merchants in the family who also had large lands in Baghdad, and other parts of Iraq. He had four sons who grew the family business activities in areas of farming, trade, shipping and philanthropy. These were Abdul Qadir, Yasseen, Qassim and Abdul Jabbar. Three of the brothers, Abdul Qadir, Qassim and Yassin were also bestowed upon with the Ottoman title of Pasha by Sultan Abdul Hameed for their extensive civil service during the Othoman era. Their extensive civil services continued during the Iraqi national era, when the brothers founded the Baghdad Chamber of Commerce. After his return from his brief exile from India during the British direct Occupation, Haj Yaseen Pasha was also a member in the first Senates council during the reign of King Faisal the first of Iraq. His philanthropic work included establishing the Red Crescent of Iraq, the Child Protection Association, establishing drinking water facilities in Baghdad. His industrial projects included cotton mills and brick factories. Abdul Qadir, the older brother was known to have saved the lives of the families of the British soldiers during the siege of Kut Al Umara during WWI and received a medal of honor from the British Crown.

At the late 19th century, the four siblings decided to break away into a wider world. Two of the brothers had prominent mansions - Qassim and later Abdul Jabbar, built mansions along the river in Basra, and Abdul Qadir built his residence mansion in Al Imara, south of Iraq. To keep with their Baghdad roots, the four brothers selected the Eastern Gate area of Baghdad (or Bab Al Sharqi) to build their mansions along the Tigris river in Baghdad. The first trusted reference to the name appearing in this area of Baghdad was in an Ottoman map below made by Rasheed Al Khoja in 1908. Before that map, the East Gate was referred to as Gate of Blackness, or Gate of Darkness in Turkish (Seyah Kapi, Sawad Kapi). The area at the time was palm tree plantations and leather tanneries for the Ottoman army, and was considered as part of the southern outskirts of historical Baghdad. They built their mansions between the area now between Sinek and Al Jumhuriyah bridges, both of which were built much later. Yaseen had his four mansions built from the area closest to the Jumhuria Bridge to his youngest brother’s property (Abdul Jabbar), now almost midway between the two bridges. The property closest now to Sinak bridge used to be Abdul Qadir’s Mansion that included his horse stables at the time. From these historical mansions, only three remain. The first is one of the houses built by Yaseen, now owned by his daughter, Amal Al Khedairy and houses the AL BEIT Al IRAQI . The second is Abdul Jabbar’s mansion, which became the building of the ministry of Social Affairs, later a Department of Archeology and an Association of Friendship between Peoples. Currently it houses an the Public Art Association. Part of the remains of Abdul Qadir’s house now is a Museum for Abdul Kareem Qassim, the first prime minister during the republican period.

It is believed that after construction, Yaseen Al Khedairy used the mention as a guest house, and a place of entertainment and music. The precise date of construction is unknown, however, it is currently believed to be between 1904 and 1908. 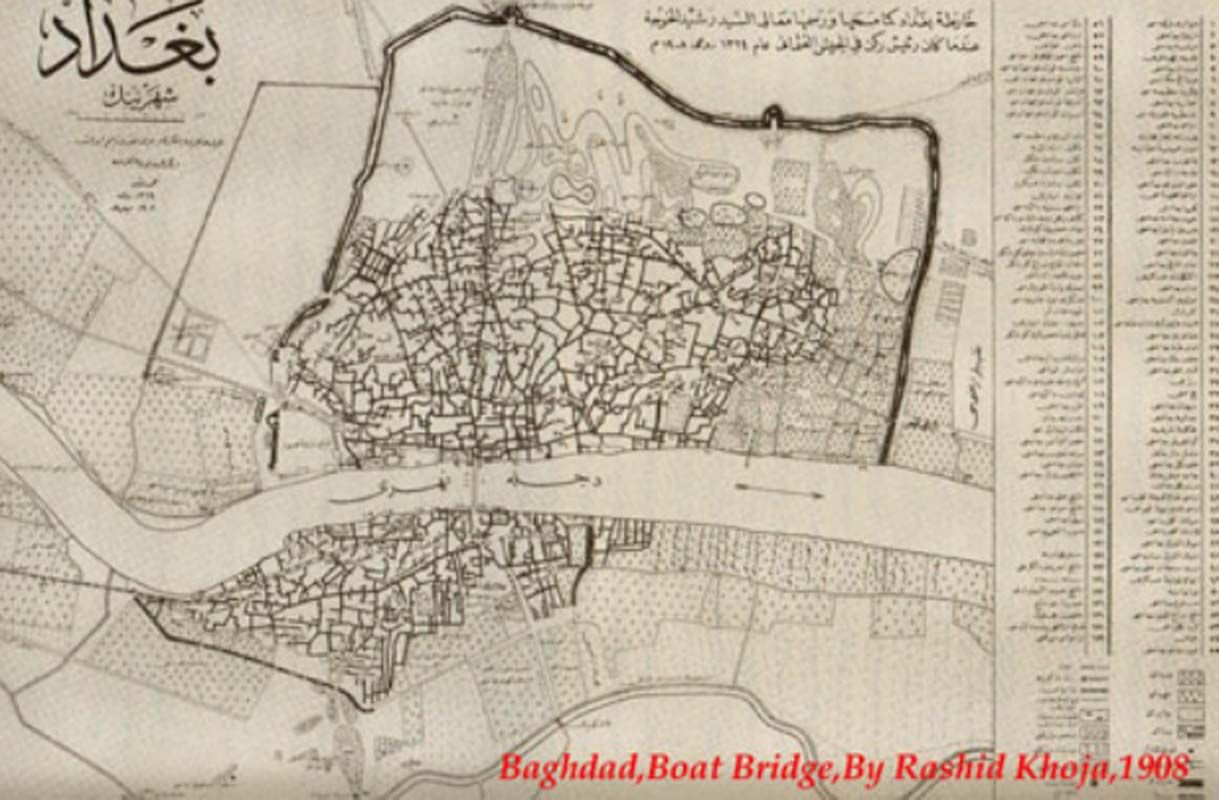 After returning from his brief exile in India, due to his resistance to the British direct occupation and mandate, Yassin Al Khedairy lived in the house adjacent to the Al Beit Al Iraqi. He leased the mansion that was to become later Al Beit Al Iraqi to the President of the British School of Archaeology in Iraq at, the late Professor Seton Lloyd, and his wife Heidi, an artist who taught sculpture in the Institute of Fine Arts in Iraq. Seton and Heidi Lloyd loved the house and made it a meeting place for so many interesting people from around the world. It is believed that Agatha Christie visited the house regularly, with her second husband, British archeologist, Max Mallowan.
In his book “The Interval: A Life in Near Eastern Archeology”, Professor Lloyd vividly described the house and its owner. He also dedicated a corner of the house later to selling heritage items from Iraq for his guests, when money for archeological research grants from London became scarce because of the expenses of the 2nd World War.
Seton’s niece visited Al Bet Al Iraqi some-time in the late nineteen eighties, and through her, the current owner of the house exchanged gifts with Professor Lloyd, including a signed copy of his book, expressing his happiness with the continuation of its life. 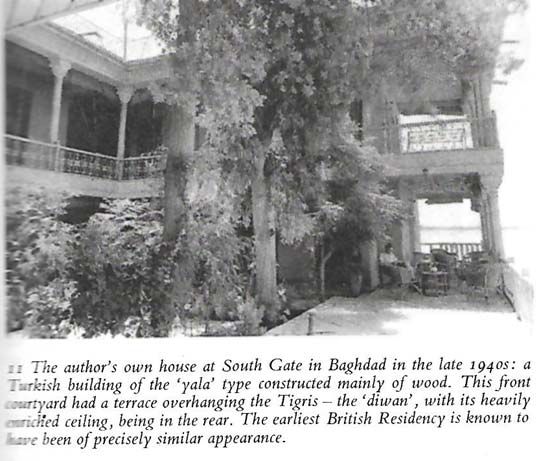 Seton Lloyd left Iraq at the end of the 1940s for another archeological position in Ankara, and Yaseen Al Khedairy had already passed away. The fifties saw the first phases of the decay of the house. The front part of the house (the Diwa Khana) collapsed, as the new dwellers did not know its worth. Then Yaseen Al Khedairy’s wife requested from the Iraqi American Architect, Ellen Ali Jawdat, who had recently arrived from the United States, after marrying Iraqi Architect Nizar Ali Jawdat, who was among the first generation of Iraqi architects at the time, to revive life in the mansion. Ellen’s plan was to keep the Harim facing the river maintaining its character. The collapsed Diwa Khana front part was converted into a modern building, with foundations that allow building seven floors on top. The modern building was to contain commercial offices and showrooms with high return. Only two floors of the original plan were constructed due to lack of funds to continue with the plan. The ground floor contained wide show rooms facing Rasheed Street, while the first floor contained modern offices that allowed easy connection, sharing a balcony facing Al Rasheed Street and others facing the courtyard, leading to the old part. Glass cubes were used for the first time to allow natural lighting. A new method of designing showrooms was presented, allowing the façade windows tilted rather than parallel to the street, allowing better view to the inside.
One of the show rooms in the ground floor was leased by the offices of Middle Eastern Airlines, and then a shop for toddlers founded and run by Amal Rasheed Ali Al Gailani. The second showroom was leased by the British Bank up to the time foreign banks were nationalized, then by the Rafidain Bank (Tigris Branch), marking a new phase of decay for that section of the building in the early sixties of the previous century. The offices of the first floor were occupied by the best Iraqi architects of the time, including Ellen Ali Jawdat, Mohammed Makiya, Qahtan Al Madfai and others. The Harim was partly occupied by the Iraqi National Group for Theatrical Arts, where several plays were rehearsed on the courtyard of the Harim part, including a famous Iraqi Play called “The Palm Tree and the Neighbors”, which was rehearsed by the famous Iraqi actor Yousif Al Ani, under the palm tree that still stands in the old courtyard. The other part of the Harim section was used as a Studio for one of the Iraqi pioneers in photography, Ahmed Qabani. In the early seventies, the house was abused by negligent tenants, with the last sadly being the Iraqi Society of Stamps and Coins. The futile tenancy legislations after 1958 had unfortunately worsened the situation, by allowing commercial tenants to abuse legal contracts without any penalties, causing the house to be exposed to destruction and ruin 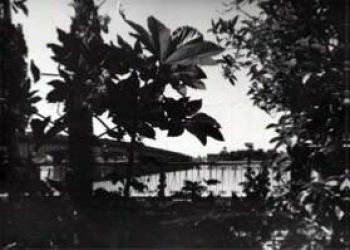 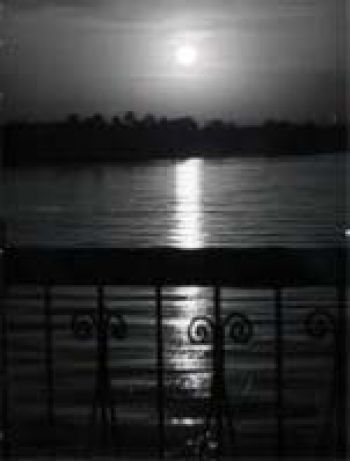 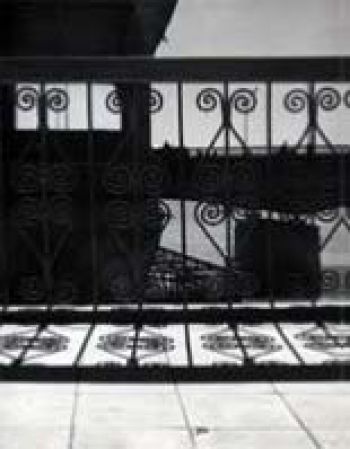 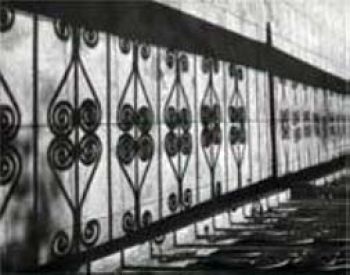 The owner continued her suffering with the tenants until she found a statement in the law that allowed to eject one tenant from one of the showrooms facing the street. She found that while he rented the place as a restaurant, he was illegally using it as a bar. So we can consider that the first beginning of Al Beit Al Iraqi was in the small section numbered 458A/1 in image 1. 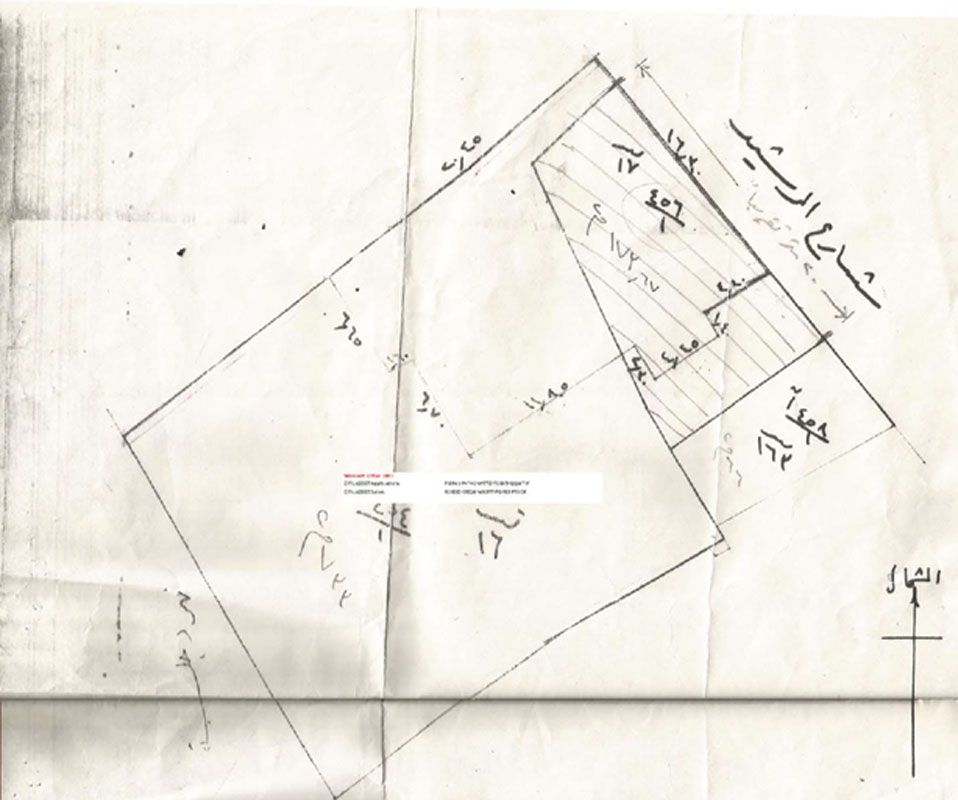 Like all other monuments of Culture in Iraq, Al Beit Al Iraqi was not spared the destruction, looting and arson that had befallen all of Iraq. The day Baghdad fell, dark forces were unleashed, and looters and arsons broke into the building looting what they can move, destroying what they couldn’t and finally attempting to burn the place down. Interestingly enough, Al Beit Al Iraqi was the only non-governmental in the area that endured such vicious attacks while all the other office buildings were spared the amount of destruction Al Beit Al Iraqi had to face. A journalist from the New York Times visited the place after the attack and was shocked to see what happened to it.
The owner’s persistence, with the aid of a small grant of ten thousand US Dollars from a Japanese NGO, managed to remove the existing debris from looting and destruction from the old courtyard and refurbish the left and right wing rooms in the old courtyard and establish NGOs for the protection of heritage and friends of Archeology, which were hosted in the old lecture hall (left wing), while the right wing room was occupied by an Iraqi human rights NGO. However, because of the security situation in Iraq general, and specifically central Baghdad at the time (2004-2005), all three NGOs had to shit down their offices after receiving threats that were taken seriously.
As a result of her efforts in trying to preserve Iraqi heritage during very difficult times, with the most challenging was during and after the invasion of 2003, and the chaos that followed, the owner of Al Beit Al Iraqi, Mrs. Amal Al Khedairy was invited to talk in universities and colleges, place of worship, and art galleries in 29 states, including many ivy league universities. Being a first hand witness to the destruction of environment and man alike, her presentations focused on the destruction of culture and heritage. The invitations came from the Fellowship of Reconciliation and Code Pink, in addition from the late Professor Edward Saeed and later confirmed by Professor Rashid Al Khalidi. She was also invited by the Office of the Special Advisor on Gender Issues in the United Nations to have informal meetings with UN delegations on the destruction of heritage and issues of gender after the invasion.
When she went back, she had to leave the country after receiving death threats from unknown resources so she had to leave to Jordan abruptly. Scavengers took the opportunity to take over the building and add further to the mess and destruction. A family occupied the old part and central part illegally and started renting the rooms for their benefit. They also opened a coffeeshop and covered all the ceilings with gypsum, adding electric structure and painting the original brick works. In the new part, an Iron smith opened shop illegally destroying the building. We finally managed to kick out the Iron smith and rent part of the front part to a company with headquarters in Dubai, the United Arab Emirates and we are promised by the family that is occupying the old part that they leave whenever our construction starts. Mr. Amal Al Khedairy visited Iraq the last time in 2014 and during that visit she visited her real estate.

Designed and Powered by ENANA.COM